On the second Monday of October, Americans celebrate Columbus Day; they remember Christopher Columbus's voyage to America in 1492.
Christopher Columbus was born in 1451 in Genoa, a city on the north-west coast of Italy. At this time Genoa was a very important commercial port. The young Christopher often went to the port and watched the ships leave: they seem to go under the horizon. May people at this time thought the world was flat, but others - Columbus included- believed that the world was round. Columbus wanted to test this idea.
He went to live to Portugal. When he was only twenty-three he had the idea of going to India, China and Japan by sailing west. If the world was round, this was possible, he thought. But he needed money, ships and men. He asked a lot of people for help, including the kings of Portugal, England and France but he got no support. Then he explained his idea to King Ferdinand and Queen Isabella of Spain. They were interested and, after some years, decided to help him. 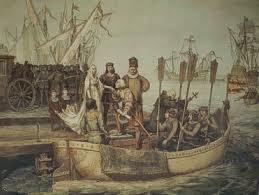 They gave him three ships: the Santa María, the Niña and the Pinta. It was difficult to find sailors for the voyage because it was long and dangerous. Finally, Columbus found about ninety men. He was ready to test his theory.
On 3rd August 1492, Columbus and the sailors left Palos, on the coast of Spain. Queen Isabella and other important people went to see him leave.
Columbus navigated with a magnetic compass. His ships travelled about 150 miles a day. The voyage was long and difficult, but the three ships arrived at the island of San Salvador in the Bahamas on 12th October 1492. Columbus claimed these new lands for Spain.
His voyage changed the future of navigation and the world. People in Europe called the new lands the “New World”. When Columbus returned to Spain he told the King and Queen about the new lands and showed them gold, valuable objects and even some natives. They were very happy with Columbus’s discovery. 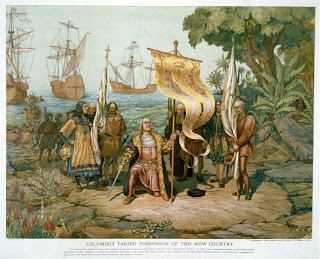 Columbus’s Day is still celebrated all over the world. In the USA this day is celebrated with long and colourful parades, marching bands and big floats dedicated to Columbus. However, there are also protests by groups of native Americans on this day, because they remember that the arrival of Columbus meant the beginning of the domination of their people.